So, I still have never remembered to take a picture!  However, I’m about due to send another package to Corrie’s deployed co-worker, so perhaps I’ll remember next time since her standing request is for these. 🙂  This is them packaged up and ready to go in the upper right hand corner. 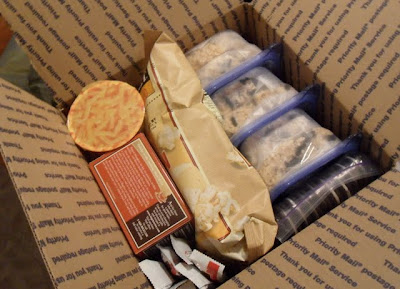 Spray a 9″x13″ baking dish with a light mist of nonstick spray.

Place butter and marshmallows into a large microwavable bowl. Microwave for a few minutes until marshmallows puff up nice and large. Remove and stir in cereal and Oreos.

Pour into the 9 x 13. With the back of a large spoon (sprayed with cooking spray) press and smooth treats into the pan. Cut into squares.

I’m back! Geesh, what a whirlwind.  Lots of travel (along with some for the aforementioned shower/bachelorette party!), work, and the graduate school quarter is winding down.  Several, several weeks ago I made Oreo Rice Krispie treats.  Within a few days following that, Corrie needed to take in a treat for a work potluck, coupled with the fact that they were a) easy and b) delicious; we made another batch.  Somehow I’ve made them probably three times and have yet to make a picture, but I sincerely doubt that they won’t get made again, so eventually the recipe will come.
Moving on…so Corrie took in the Oreo treats and one of his co-workers loved them so much that she requested more treats for their next treat day.  In fact, she is being deployed, and I had planned on joining Operation Baking Gals, but when she found out she told Corrie I could sponsor her instead. 😉  And what was her first request…yes, Rice Krispie Treats!  Ha.  Then, the next treat day rolled around, but I had just read this recipe and decided to make these instead for something different!  These were met with rave reviews, and I was told they were gone by lunch.  Again, super easy and apparently popular.  What a fabulous combination!
And for the record, I’m apparently on a Rice Krispies Treat kick, because I then needed something that wouldn’t melt in the mail for some packages for my niece who was at camp, my brother, and my brother-in-law, so I did some with Reese’s Pieces mixed in…

Put cereal into a large mixing bowl and set aside.  Then place marshmallows and butter into a large bowl, and microwave until puffy (~ 3 minutes).  Pour the melted butter/marshmallow mixture onto the cereal and combine with a rubber spatula until the cereal is coated.  Pour into the prepared pan, and press into the pan to form an even layer.

In a medium microwave-safe bowl, melt the peanut butter until softened and runny, about 30-45 seconds.   Add in the quartered peanut butter cups, and gently stir to combine.  Pour the mixture over the cereal layer then drizzle or spread the melted chocolate on top of that layer.  Refrigerate until hardened then cut into squares and enjoy!